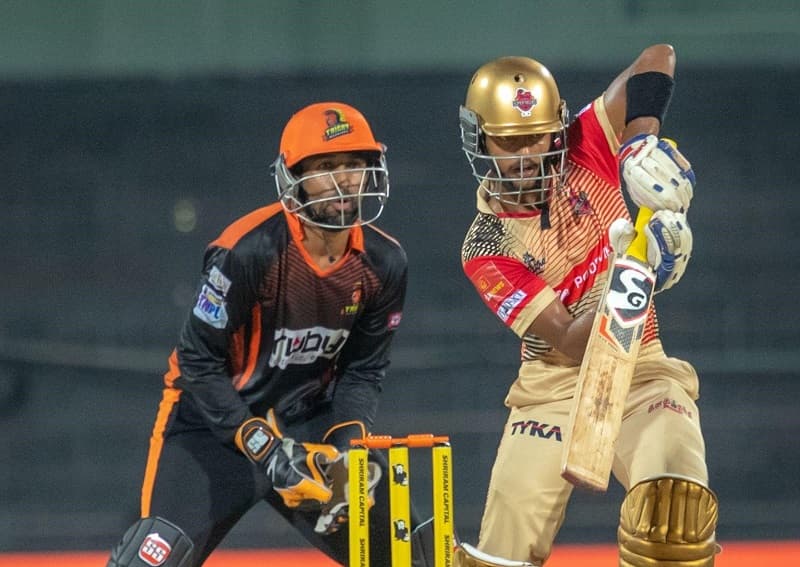 Chennai, August 10: Chepauk Super Gillies rode on the young shoulders of Sunderaraman Radhakrishnan to post a strong total against Ruby Trichy Warriors in Qualifier 1 of the Shriram Capital Tamil Nadu Premier League at the MA Chidambaram Stadium here on Tuesday.

The 22-year-old Radhakrishnan came good for the second match in succession by striking an unbeaten 82 off 54 balls (7 fours, 3 sixes) to lift Chepauk to 153-3 in 20 overs. Just two days ago, he scored a tenacious 55 in his second TNPL match and he carried that confidence and form into this game.

Chepauk was in a spot of bother after losing two of their top batsmen – captain Kaushik Gandhi (1) and Narayan Jagadeesan (14 off 13 balls, 2 fours) – back in the pavilion for 23 runs in the third over. But Radhakrishnan began rebuilding the innings with Uthirasamy Sasidev (23 of 29 balls, 1 six) by raising 66 runs off 57 balls for the third wicket with his contribution being 42 off 28 balls.

The Coimbatore lad found another able ally in veteran Rajagopal Sathish (29 not out off 22 balls, (4 fours), after the departure of Sasidev, and together they added 64 runs off 44 balls for the fourth wicket.

Trichy, who had won the toss and decided to bowl first, did not have much to shout about. Pacer P Saravana Kumar (2-32) and left-arm spinner M Mathivanan (1-26) were the only bowlers to be among the wickets.

Over the past 85 years, Tamil Nadu has produced a lot of cricketers who have built the foundation for the thriving sport as we see it today. As it is well known,

cricketers in the early 50s and 60s did not get much monetary benefit playing the game that we all love so much.

In recognition and appreciation of their immense contribution towards the game, TNCA had instituted a one-time payment of Rs. 5 Lakh to cricketers, groundsmen, match officials, and others who helped build our sport.

Welcoming this initiative, CSK has come forward to show their love and respect to these veterans and will be contributing Rs. 7 Lakhs each to the veteran cricketers – the number synonymous with our much-loved captain, Mahendra Singh Dhoni.

Former International Cricket Council (ICC), Board of Control for Cricket in India (BCCI), and TNCA president N Srinivasan, who presented the cheques to the former players and officials, welcomed the gesture. “This is an outstanding occasion for me because we are honoring stalwarts of Tamil Nadu and I think they have contributed more to Tamil Nadu than what we are doing today. It’s a privilege to be in their presence,” he said.