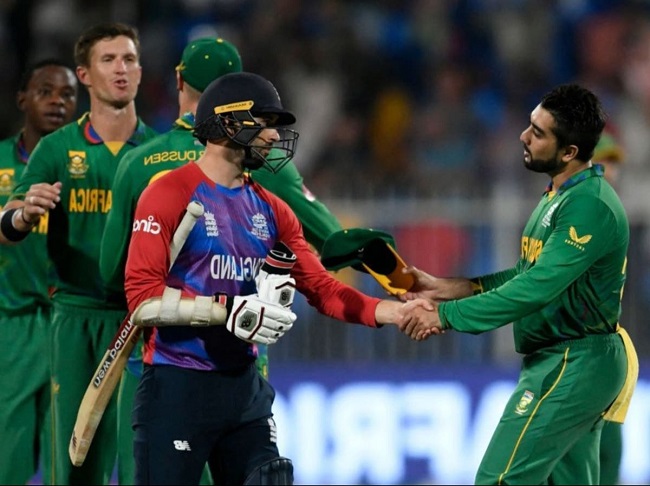 Finally, in a thrilling match, South Africa defeated unbeaten running England by 10 runs but crashed out of the semi-finals but was not able to play in the semifinals.

Jason Roy and Jos Buttler gave England a good start to chase 190 runs. But Jason Rai got injured and returned to the pavilion.

Performance of South Africa team and Jason Roy get injured

The England team, chasing 190 runs, also started with a bang. The team suffered a major setback when opener Jason Roy came off the ground with a hamstring injury.

After this, Jos Buttler (26) was dismissed in the sixth over. Enrique Nortya got Africa back by taking the first wicket. At the same time, in the very next over, Tabrez Shamsi dismissed Jonny Bairstow (1).

After this, Moeen Ali and David Malan shared a quick 56-run partnership off 36 balls for the third wicket.

England could score only 179 runs in 20 overs for the loss of 8 wickets. For Africa, Rabada took 3, Dwayne Pretorius 2, Tavarez Shamsi also took 2 wickets while Anrikh Norkhia got one wicket.

After being out of the semi-final race, South Africa had to defend 14 runs in the last over to win the match.

Kagiso Rabada, who hit three consecutive sixes, came to the last over of the match and created a sensation by taking a hat-trick.

Rabada spent only 3 runs in the last three balls. Rabada has become the first bowler for South Africa to take a hat-trick in the T20 World Cup.

Earlier, after losing the toss, South Africa got off to a bad start and in the third over opener Reeza Hendrix (2) was sent back to the pavilion by Moeen Ali.

At the same time, for the third wicket, Van der Dussen and Aiden Markram shared an unbeaten 103 runs in just 52 balls.

During this, Van der Dussen scored an unbeaten 94 off 60 balls while Markram played an explosive inning of 52 runs off 25 balls.