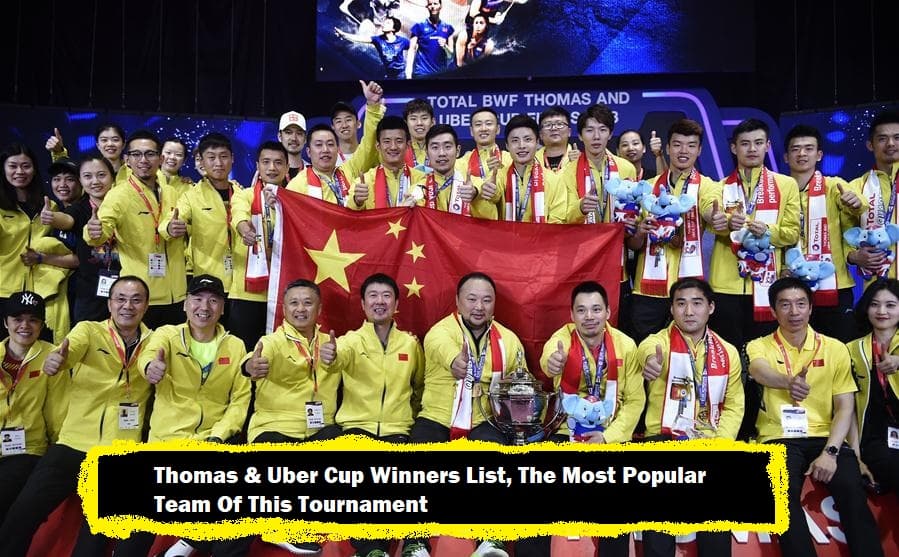 Thoma’s Cup which is known as ‘World’s Men Tournament is an international badminton competition among teams representing member nations of the Badminton World Federation, the championship has been conducted every two years since the 1982 tournament, the final year of the tournament involves twelve-team competing at venues within a host nation and is played concurrently with the final phase of the world women’s team the Uber Cup. Check Thomas & Uber Cup Winners List, Most Popular Team Of This Tournament.

The Uber Cup is known as the ‘World Team Championships for women’ is a major international badminton competition contested by women’s national badminton teams. Both the team has a similar format and they are considered as one of the best and most famous clubs who play against each other and the team are all set for their upcoming matches the schedule is not out but you can check out the winner details.

So now let’s check out the complete details about Thomas & Uber Cup Winners List, The Most Popular Team Of This Tournament.

Popular Team of the Tournamnet

Indonesia is one of the most popular and well-known teams who has won many titles under Thomas cup and they are known as best players as the team Indonesia has some of the strong players who play well physically and mentally also and they have a huge fan following out the players get many types of benefits and extra money paid to them especially when they won the competition the sports is one of the most famous which is played all over worldwide and Indonesia has made a special place in their fans heart.

Whereas China is one of the best and well known Uber World Cup they have some very strong and good players to make their team stronger sometimes they purchase new players who can play well and won the country name for them not only in this club but overall China has made the second name in the Thoma’s Cup after Indonesia and now Due to COVID-19 pandemic the games were not scheduled but soon it will happen. So stay tuned with us to get the latest details.