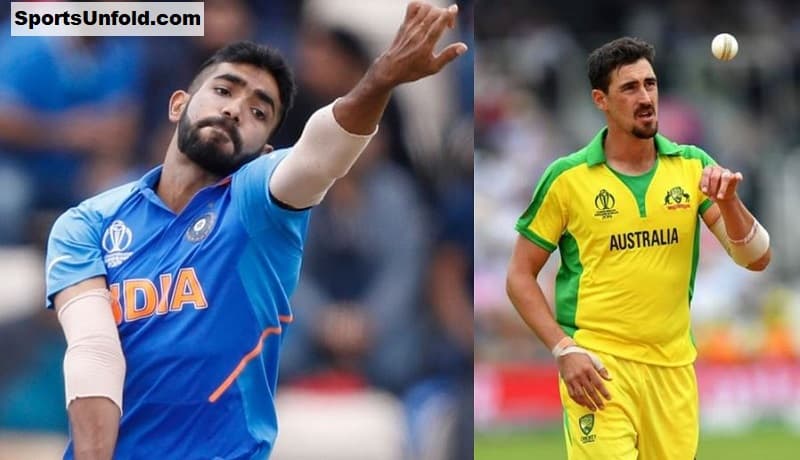 Something about speed brings excitement and a sense of adventure and thrill among people in almost all spheres of life. In cricket too, a genuine fast bowler bowling full throttle and intimidating batters with his speed is a spectacle to watch for. From the pace quartet of dominant Windies side of the 1970s to 80s to some genuine fast bowlers from other countries, cricket has always been enriched by a crop of genuine fast bowlers who can consistently bowl above 145+ Kmph. While there are some talks that there are not enough. So Check Top 10 Fastest Bowlers In The World In 2021.

Here is the list of the top 10 fastest bowlers in the world in 2021:- (Note – The rankings are based on the fastest ball bowled by that player, however all the players mentioned in the list bowl with an average speed of 145- 155 Kmph)

Jasprit Bumrah is one of the top fast bowlers going around in the world. His ability to bowl yorkers at will has been the hallmark of his success in white-ball cricket. In test cricket too, Jasprit Bumrah has an impeccable record and has proven his worth in overseas conditions. In one of those overseas tours, in India’s tour of Australia 2018 Jasprit Bumrah bowled his fastest delivery till now clocking at 153.26 kmph in Adelaide Test. His average bowling speed ranges around 145 coupled with his brilliant line and lengths along with variations.

Adam Milne is a kiwi fast bowler with smooth and easy action, with the ability to generate some serious pace. He bowled his fastest ball against Windies in a T20 match clocking 153.28 kmph. His average pace is between 145- 150 kmph and can swing the ball at that pace. Milne started his career with a bang, but series of

injuries have derailed his career. Recently he made a comeback on the national side, and if injuries don’t bother him again, he has all the potential to succeed at the International level.

Rabada is one of the top fast bowlers going around in the world. He has been the mainstay of South African fast bowling for quite some years now. He can bowl with some serious pace coupled with his impeccable line and lengths. His fastest ball came in IPL 2019 when he clocked 154.23 kmph. His average speed hovers around 145 and he has been one of the most feared and difficult bowlers to face in recent times. With age on his side, Rabada is on his way to becoming one of the best bowlers of all time.

Wahab Riaz has the potential to bowl very fast and intimidating on his day. The world saw that in a world cup match of 2015 against Australia where he bowled one of the most scintillating spells of fast bowling against Shane Watson. But his fastest ball came against India in the same world cup where he clocked 154.5 kmph. His average speed is around 145 kmph and has the potential to increase it when needed. In recent times, Riaz has become more of a T20 specialist playing T20 leagues all over the world.

Jofra Archer is a Barbados born England cricketer. In recent times, his exploits in International, as well as T20 leagues, have made him one of the top fast bowlers going around in the world. He showed his potential in the world cup 2019 when he was drafted into the side just before the world cup and then went on to bowl that memorable spell in Ashes on his debut where he bowled his fastest ball at

154.65 and injured Smith with his fearsome fast bowling. He is one of the fastest bowlers who has represented England to date and has a bright future ahead.

Ferguson is another kiwi fast bowler who has made inroads in recent times. After the injury of Milne, Ferguson has replaced him as a genuine fast bowler who can clock 150 kmph consistently. He has since, become the mainstay of Newzealand fast bowling, especially in white-ball cricket. He bowled his fastest ball against Bangladesh at Napier in 2019 at 154.9 kmph and his average speed is around 150 kmph. If injuries are taken care of, Ferguson can be an impact player for kiwis for a long time.

Hasnain might be a surprise addition to the list for some, but this talented young bowler from Pakistan has the potential to bowl at some serious pace. He bowled his fastest ball in the Caribbean Premier League(CPL) and his average speed is in the late 140s kmph. He is another young talent from Pakistan who0 can serve the country for a long time, provided he is handled properly and given the required confidence by team management.

Mark Wood has bowled the fastest ball ever by England Cricketer. He is a tall fast bowler who can bowl at some serious pace and can generate good bounce. His sheer pace has made him one of the vital cogs of the English team in recent years. His fastest ball came against Newzealand in a Test match clocking the speed of 156.1kmph. His average speed is also around 150kmph and his potential to bowl consistently around that speed makes him a special and rare talent.

Nortje is one of the fastest bowlers in the world right now who can rattle the batters with his sheer pace. He can consistently bowl above 150kmph and his fastest ball came in an IPL match against Rajasthan Royals where he was playing for Delhi Capitals. He has grown in stature in world cricket in recent times and many more pacy spells of fast bowling are expected of him. He along with Rabada makes one of the most fearsome bowling pairs in world cricket right now.

145-152 kmph. Starc has won Australia many matches with his brilliant bowling and many such breakthrough performances will be expected from him in the future.

This is the list of the top 10 fastest bowlers in the world currently, along with these top 10, there are other fast bowlers too who can consistently bowl in the range of 140kmph and are very lethal.