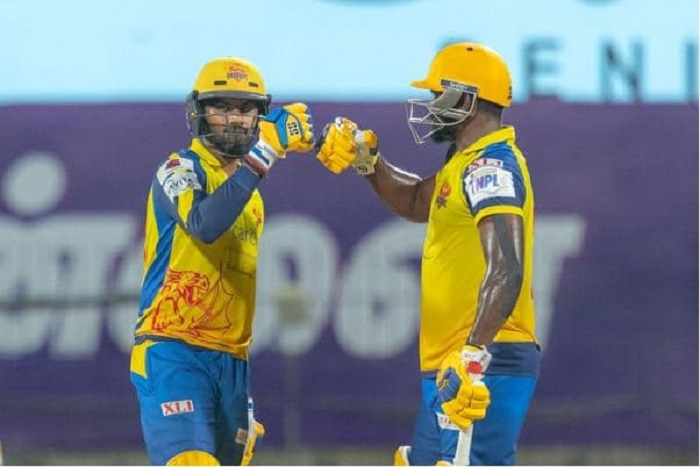 Chennai, August 12: Defending champions Chepauk Super Gillies will be fancying their chances against last season’s finalists Dindigul Dragons when they meet in Qualifier 2 of the Shriram Capital Tamil Nadu Premier League at the MA Chidambaram Stadium here on Friday.

The odds favor Chepauk as they have not only upstaged Dindigul in their last two meetings – in the 2019 final and this season in the league phase – but also hold a 5-2 advantage against the same opponent in 7 matchups overall.

Despite the odds being stacked in their favor, Chepauk enters this duel with a fragile tag around it. They have lost two back-to-back matches while Dindigul will take the field with the added confidence of having won two matches in a row.

Chepauk head coach Hemang Badani, however, is unperturbed and believes his wards have it in them to turn things around. “It’s just one of those things that happen in this format and we have to bounce back. We will look to learn from our mistakes and correct our errors. We have been in this situation before, it takes me back to the year 2017, we lost to Tuti (Patriots) in the league stage and in the qualifiers but we beat them in the finals. So we know how to bounce back but yes we will have to work hard,” he said. Badani’s opposite number Subramanian Badrinath insists they hold an advantage. “The pressure is on them as well, so the odds have evened out. Last time they were

coming off a win and we had lost the previous game but now we are playing good cricket and they are coming from losses, so I would say momentum is on our side,” Badrinath said.

Interestingly, Ruby Trichy Warriors have shown twice over that the much-acclaimed Chepauk attack can be tamed with calm minds and if they are left-handed batsmen then the advantage quotient rises further. Nidhish Rajagopal and Adithya Ganesh, both Trichy southpaws, proved it in a big way in Trichy’s victories against Chepauk.

Dindigul has a big match player in their captain and left-handed opener C Hari Nishaanth. The 25-year-old from Coimbatore has led from the front and is the second-highest run-getter in the tournament with 312 runs under his belt, 46 runs behind leader Bhardwaj Sai Sudharsan of Lyca Kovai Kings.

A worrying factor though for Dindigul is that they have relied too heavily on Nishaanth for their runs and victories and if he gets out cheaply then could be in trouble. They do possess tremendous firepower in Mani Bharathy and the explosive Vivek Rajendran but no other batsman apart from Nishaanth has shown the ability to take the game deep for the big hitters to cash in.

Badrinath admitted the over-reliance on Hari Nishaanth is a worry and they are keen to address it. “It is something that he has to do because partnerships haven’t clicked but Hari has taken it upon himself and delivered and handled the pressure really well. But yes, there is some concern at the top and the opening partnerships haven’t clicked and we are addressing it,” he said. Chepauk on the other hand has found a new hero in Sunderaraman Radhakrishnan, who has carried the innings on his young shoulders for two matches in succession when the top order has struggled. They also have the talismanic Rajagopal Sathish to firm up their

middle-order. Openers Narayan Jagadeesan and captain Kaushik Gandhi are too good batsmen to fail regularly, they are due for a big score, and what better occasion than Qualifier 2.

On the bowling front too they are well stocked with left-arm spinners Ravisrinivasan Sai Kishore (8 wickets) and Manimaran Siddharth (9 wickets) leading the way backed by all-rounders Rajagopal Sathish and Sonu Yadav. Fast bowler Sandeep Warrier is expected to return after being rested for a niggle, adding strength to the attack further.

Badani indicated that there is a half chance that the former Kerala pacer may play. “He’s still unfit but being watched and his rehab is going on. There’s a 50% chance of him playing tomorrow but beyond that, it’s something that we have to wait and see. Do we risk him because he has a lot of cricket going forward? So, that’s a collective call that the team will take in some time,” the former India batsman said.

In contrast, Dindigul has relied heavily on their left-arm pacers Rangaraj Suthesh at the start and the 23-year-old Gurjapneet Singh at the death to keep the rivals in check. Left-arm Munnusamy Silambarasan has shouldered the spin attack well but has not found enough support from other slow bowlers. Opposite teams have often taken advantage of batsmen going after the other spinners after seeing out Silambarasan’s overs.

The teams’ strengths and weaknesses are evident in how they have fared in the past. While Chepauk has had a bigger success rate batting first — 14 wins, 5 losses — while Dindigul has been better batting second (15 wins, 9 losses). It shows Chepauk bowlers have defended totals well while Dindigul batsmen are better at chasing down targets. The toss will, thus, be a crucial factor for both teams.