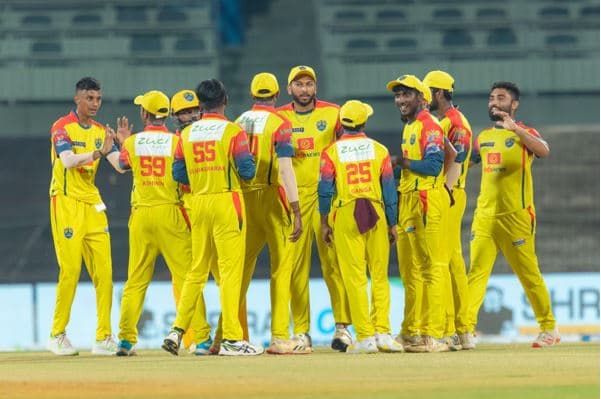 Chennai, August 9: The Shriram Capital Tamil Nadu Premier League enters the final stretch with the Playoffs that begin at the MA Chidambaram from Tuesday. After a keenly contested league, spread over 28 days of non-stop action featuring eight teams, four have risen to the top and they will lock horns over the week to decide the finalists.

A look at how the teams stack up ahead of the Playoffs:

X-Factor: Captain Rahil Shah’s inspirational captaincy. The 36-year-old has been a soothing influence on the young team and he has led from the front with economical bowling displays.

What worked: They have been the story of the tournament. A team that has never risen above the sixth spot in the history of the league, topped the standings. It has been a collective display of brilliance that has helped them seize crucial moments of play and record victories.

Weaknesses: Lack of big-match experience. They will be tested severely in the Playoffs as they will be up against teams that already know how to deal with pressure situations. Head to head v CSG (from 2016): Played 5 Won 2, Lost

“This year all youngsters have performed. All of them are very keen on achieving something big. The other thing they have done is stick with their plans.

“Rahil Shah is the perfect guy to handle the young bunch and not pressurize things. He only wanted to win the game and didn’t care about the points table.”

X-Factor: Big match players. As defending champions, they walk the talk and raise their game accordingly.

What worked: The squad is packed with seasoned campaigners who have delivered a match-winning performance at least once. Jagadeesan’s enterprise at the top, captain Kaushik Gandhi’s return to form, Ragajagopal Sathish’s all-around skills, Sai Kishore’s miserly spells have been the high points in their campaign.

Weaknesses: Over-dependence on Jagadeesan and Kaushik for runs. If they fall cheaply, the team struggles as it did against Trichy in their last league match.

“After the defeat, yesterday boys will come back stronger. For both teams, it is a fresh day. I’m sure they will be having the confidence but both teams start from zero and whoever plays well will win the game. It doesn’t matter if a team is qualifying for the 1st time but it is an advantage for us as we have been in the Playoffs more than Ruby. It is more important than both

the teams bring their best and whichever team plays well will win the game.”

X-Factor: Vivek Rajendran. Has the ability to smack the best of attacks. An outright match-winner who clears the boundaries with ease, like he did in Dindigul’s last game against iDream Tiruppur Tamizhans.What worked: Change in captaincy. Hari Nishaanth taking over the reins from Rajhamany Srinivasan infused

new synergy in the side. More importantly, it has not affected the left-hander’s batting at all.

Weaknesses: Spin bowling. The spinners – Munnusamy Silambarasan, MS Sanjay, S Swaminathan, Mokit Hariharan – have not posed a threat for batsmen to be wary of.  Of the 34 wickets they claimed, only 9 have gone to spinners.

It has resulted in the bowling attack being uni-dimensional and heavily reliant on pacers.

“We are confident and we have practiced very hard for where we’ve reached, so we totally deserve it. We have used our resources to the fullest by reacting to situations in the right manner. “. “As a batsman, I have played many tournaments but as a captain, it’s an added responsibility. They handed it over to me after R Srinivasan was injured, unfortunately. But

after that, I was in a well-prepared zone. It was not very difficult for me, I am enjoying it. While batting, I don’t think about captaincy, I just want to take the team through. That gives me some normalcy when I can just think as a batsman.

“We as a team are in a good space because we have delivered the goods. Definitely, there have been ups and downs and that happens in T20s, so no one can be perfect, we just have some fine-tuning to do in upcoming games. As a captain of a winning team, I’m very happy. The boys are reacting well to my captaincy and it becomes a lot easier when they deliver. I am enjoying that and I’m proud of the boys.”

X-Factor: Abhishek Tanwar. An all-rounder in the true sense. He has stepped up to bowl the final overs and on most occasions kept the scoring rate under check. He can be destructive with the bat as well.

What worked: Sai Sudharsan. The youngster has been the find of the tournament. All of 20 years, he made an impression in five of the seven matches he played to lead the batting charts. It meant Kovai Kings were guaranteed 160-plus totals and the only times it fell below that score was when Sai Sudharsan got out cheaply. The charismatic captain M Shahrukh Khan has been another factor that has kept the team going. Weaknesses: Brittle middle-order. Kovai has relied on Sai Sudharsan and opener Ganga Sridhar Raju for runs at the top but if they get out early then the onus falls on their captain Shahrukh Khan to bail the side out. The

middle-order support to anchor the innings if early wickets fall is lacking.

“When you win your last game in the league phase it sets you in the right momentum. So, the mood has been relaxed. At the same time, this is totally a fresh leg of the tournament so we’ll start off thinking that it’s the first game and not make the errors that we made earlier. It’s the first time I am captaining, so there’s a lot of responsibility and a lot of external pressure as well. But from the team’s point of view, I’m enjoying it a lot.”