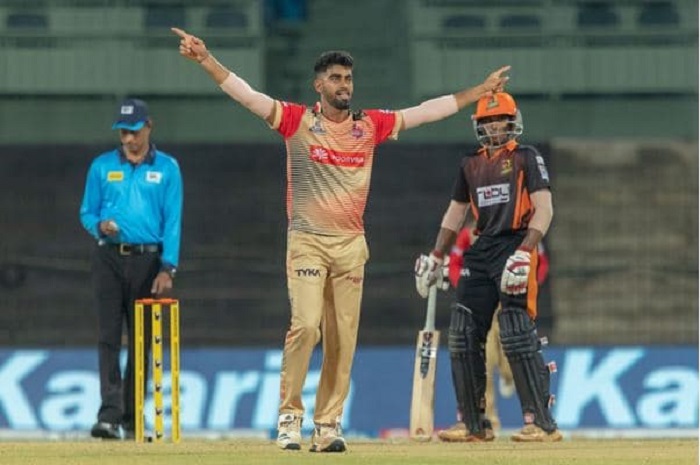 It was always a given that the defending champions had the big match experience and it showed in ample measure as they first posted a robust total onboard and then defended it stoutly despite a bold attempt by Trichy.

Narayan Jagadeesan led the run charge for Chepauk with a brilliant 90 off 58 balls (7 fours, 2 sixes) as they raised 183-6 in 20 overs. The bowlers then withstood Trichy’s charge by restricting them to 175-7 in 20 overs for an 8-run victory and lay their hands on their third TNPL title following their successes in 2017 and 2019.

All-rounder P Saravana Kumar (45 not out off 25 balls, 3 fours, 3 sixes) made a brave attempt after Trichy was down in the dumps at 108 for six in the 14th over. But Chepauk’s composure in the final moments helped them in good stead. Left-arm spinner Ravisrinivasan Sai Kishore (1-30), who bowled the final over with Trichy needing 13 runs, conceded just four to seal a thrilling victory.

Jagadeesan was elated at playing a key role in the team’s win. “I’ve been scoring a lot of runs in the TNPL and I get that I had to score runs when it actually mattered, so I’m really happy it came out well.

“The boys coped with the pressure really well and especially in the last over when Sai bowled, he just killed it,” he said.

The Trichy reply began in blazing fashion led by the teenaged opener VP Amith Sathvik (36 off 16 balls), who smacked five sixes and a four. The opening stand between Sathvik and S Santosh Shiv (16 off 12 balls) was worth 40 runs off just 20 balls as Trichy raced to the best Powerplay score (65-2) of the season, bettering Chepauk 61-0 against Dindigul Dragons in their league match. Incidentally, it was also Trichy’s highest Powerplay score in the tournament.

But every time Trichy tried to take control the Chepauk bowlers struck and pegged them back. The fielding matched their bowling with Ramadoss Alexandar’s one-handed catch off his own bowling to claim Adnan Khan (4) proving to be the highlight. Trichy captain Rahil Shah felt the bowling could have been better. “It was a thriller, till the last over we were in the game but Sai bowled well and you have to give it to him. We probably gave 15 extra runs while bowling, for once our bowling was a little lackluster, we didn’t

execute our plans. Nevertheless, our batsmen supported us and came back hard and we had a good start and almost pulled it off,” he said, adding he was immensely pleased with the way his side fought in the finale. “We gave it a good fight and lost to a much better side, CSG has a lot of superstars. So yeah, we fought hard and I’m proud of my guys,” he said.

Earlier, the 26-year-old Jagadeesan went after the Trichy bowling from the word go and was instrumental in providing a flying start to the innings along with his captain Kaushik Gandhi (26 off 19 balls, 2 fours, 1 six). Together they raised 58 runs in the Powerplay before Gandhi was bowled, playing on a slower ball from Murugan Poiyamozhi. Despite losing partners at the other end Jagadeesan continued unperturbed and posted his third fifty of the season and 17th overall in the tournament with an array of impressive shots. The Coimbatore batsman had his share of luck when he was dropped by Adnan Khan at

cover off Poiyamozhi in the sixth over when his score was 26 and the team total 57.

All-rounders S Harish Kumar (13 off 7 balls) and Sonu Yadav (17 not out off 8 balls) ensured Chepauk held the upper hand by ending the innings in a flourish. In the last 10 overs, Chepauk added 104 runs with Jagadeesan contributing 48 while the Harish-Sonu stand fetched them 28 runs off just 13 balls.

Trichy were hampered by a niggle to senior pacer Sunil Sam, who could bowl just two overs. Captain Rahil Shah (2-31) and fast bowler Poiymozhi (2-37), stepped up but they could not rein in Jagadeesan. Saravana Kumar was expensive and went wicketless but he took a fantastic catch on the edge of the boundary to

Upstox Most Valuable Player of the Match: P Saravana Kumar

Upstox Most Valuable Asset of the Tournament: Nidhish Rajagopal (RTW)

Most Promising Youngster of the Tournament: Sai Sudharsan (LKK)