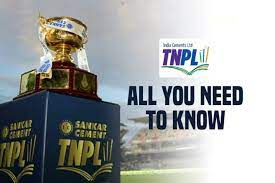 TNPL 2022 Final: Live Streaming, when & where : The Tamil Nadu Premier League is in its final leg, we are one match left to get our next Champion. This year, CSG and LKK- Chepauk Super gillies and Lyca Kovai Kings are going to compete in the finals. CSG reached the finals after their huge victory over Nellai Royal kings in the Qualifier match.

The live streaming details of CSG vs LKK

The match will take place on July 31, 202 at 7:15 PM at SNR College ground in Coimbatore. TNPL’s official handle announced the streaming details on Twitter. Star sports are official partners, Star Sports 1, Star Sports Tamil, and Star sports HD will live stream the matches. You can also watch the live stream on the Voot app.