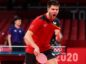 Table Tennis is a popular sport that is emerging with popularity. There are various professional tournaments for table tennis in World and it has reached a height where there are famous players from around the world. Check Top 10 Famous Table Tennis Players In The World.

Check out the list of the top 10 famous and professional table tennis players in the world right now here on this page.

Ma Lin is a popular and professional Table tennis player where from Shenyang, Liaoning, China. He is a retired player from China whose style is Chinese Penhold with a total of 4 types of equipment.

Dimitrij is a popular and professional table tennis player from Germany. He is a Ukraine-born player who represents Germany in the game.

The player plays with the right-handed, shakehand grip. He holds the record for two silver and four bronze medals at the Olympics.

ITTF ranks the player in the ninth position for the World Ranking of the game.

Liang is a popular player who had the highest-ranking 6 in 2019 whereas the player is currently ranked at the 8th position.

He bags a gold medal for the Chinese at the Team World Cup 2018 and World Team Championships 2018.

The player was ranked at the highest in 2019 that is on position 2 of the table.

Lin is a popular and professional Table tennis player from Yuanshan, Yilan County, Taiwan. He is a left-handed shakehand grip player in the game.

The player uses equipment like Butterfly Lin Yun-Ju SZLC with energy 05 hard on the forehand and digits 05 on the backhand.

The highest-ranking of the player is on position 5 in 2021.

He is a right-handed, shake-hand grip player. He has the equipment as Butterfly Tomokazi Harimoto ALC, Butterfly Dignics 05 (Forehand), Dignics 05 (Backhand).

The highest rankings for the player took place in January 2019 where he holds the 3rd position.

Hugo is a popular and professional table tennis player from Brazil. The player is born in Rio de Janeiro, Brazil where he is a right-handed, shake-hand, grip player.

He is regarded as the first-ever player from Latin America who makes it to the top 10 of the ITTF World Rankings.

The player is currently ranked at position 4 in the world rankings where he is a part of the club TTF Liebherr Ochsenhausen.

The player is currently ranked in position 2 of the game who represents the club Shandong Weiqiao.

The fan is a popular Chinese player and a professional player who plays at the position of right-handed, shake hand grip. He uses equipment like Stiga Infinity VPS with DHS Hurricane 3 National (Blue Sponge) (FH, Black), Butterfly Dignics 05 (BH, Red)

The highest-ranking for the number 1 position where he has been since 2018.