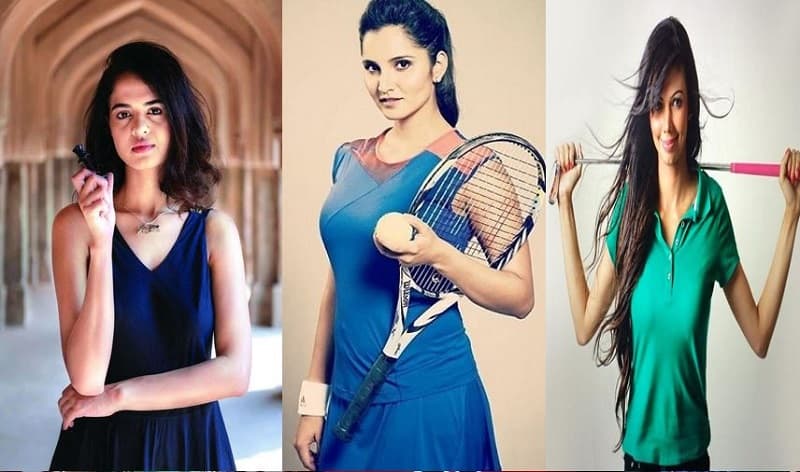 Indian female athletes are exceptional in their game and also hold world rankings. They are full of sports spirit but beautiful too. Indian women have always shown up their names in the sporting list and one of the finest game plays. So check Top 10 Hottest Indian Sports Female.

Sania is a former World No. 1 tennis doubles player from India. He played the matches for India and has her name in beautiful women players. She is the winner of 6 Grand Slams to date and is one of the most highest-paid athletes.

She bags position 27 in the world in female singles in 2007. Her career earning during the period is US $1 Million. She was in the list of top 100 in the most influential people of the “Time” Magazine.

Jwala is one of the best badminton players in the game. She is the finest of all in the court with 2 winning golds and a silver medal winner in the Delhi version of the Commonwealth Games. Jwala is one of the most aggressive players on the ground. She is the winner of a bronze medal in the 2011 London world Championships.

The government of India awarded her with the Arjuna Award and she is one of the best in female doubles. She is a finishing runner-up of the TOULOUSE Open in 2004. She is a winner of the National Championships in badminton 13 times.

Sunitha is one of the best tennis players on the ground born in Jersey City in the US. She played finals 7 times and has 8 career titles on the ITF Women’s Circuit. Sunitha has been a part of many WTA Tour events.

Sunitha has also represented Indian in the 2008 Summer Olympics and Fed Cup internationally. Rest other times she was representing the US in the game.

Sonika is a daughter of a former wrestler Chandgi Ram. She is the only female wrestler to represent Indian in Asian Games. She is also a member of Doha Asian Game’s Indian Squad. Sonika has also been a part of the Hindi TV reality show Fear Factor: Khatron Ke Khiladi Season2. Moreover, she was also a part of Bigg Boss season 5.

Prachi Tehlan has been both a basketball and netball player professionally. She is the captain of the Indian netball in 2010 and represented Indian in the 2010 Delhi Commonwealth Games.

Team Indian also wins the first medal in the South Asian Beach Games in 2011 under her captaincy.

Pratima Singh is a basketball player where she is also the captain of the team in the women’s national basketball team. She is the owner of best player awards in various state and national championships.

She is also the winner of India’s first professional basketball league MBLP in 2010.

Saina is the number 1 Badminton player today. She has given her best performance at ht 2008 Beijing Olympics 2008. Saina creates a history for Indian when she bought a bronze medal in badminton for India at the 2012 London Olympics.

She one of the top 5 badminton players in the world.

Dipika is the Indian squash player where she holds the ranking for top 10 WSA. She is the winner of 3 WISPA tour titles in 2001. She is one of the prominent players in squash from India.

Tania is said to be the beauty with brains where she is won her first international title at the age of 8. She is the winner of Woman Grandmaster 2005 and International Master 2008.

She is the receiver of the Arjuna Awards in 2009.

Sharmila is an Indo-French golf player from Banglore, India. She is one of the youngest Indian golfers to appear in the Ladies’ European Tour.

She is the winner of the Hero-KGA tournament in 2012. In 2015 she also won the Hero-WPGT and also she is a winner of 70 medals in her sports career.