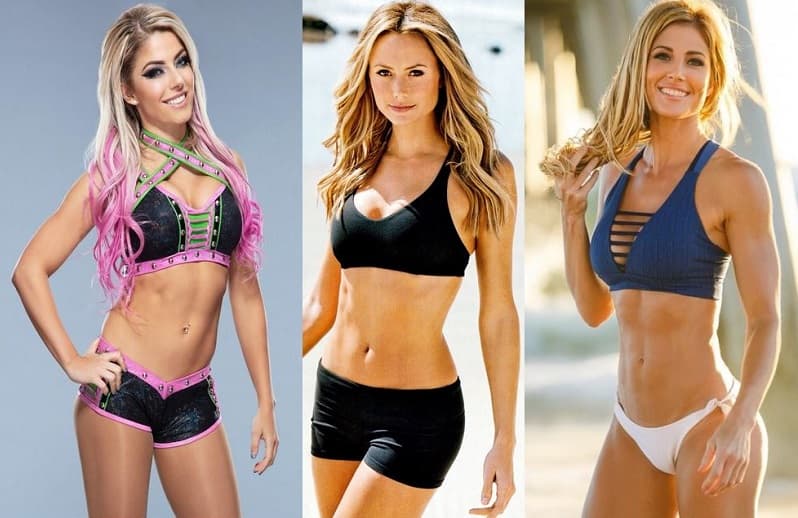 The WWE Diva’s Championship was a woman wrestling championship in WWE promotion. The word Diva in the championship refers to the female wrestler. The term was applied to them after the back interview or ring announcement, the WWE refers to female talent. Women are no lesser than boys in any of the fields they manage all things and work hard on themselves. Check Top 10 Hottest WWE Female Superstars.

Stacy Keibler is one of the most all-time hottest divas a female wrestler, she is born in the USA and she started her career as different Superstars.

She is popularly known for her long legs “The Legs of WCW” and “The Legs of WWE.”She was retired in the year 2006 and for the past 20 years, she has been introducing in many magazines and other fame. Stacy is the most beautiful diva player.

Lana is born in Gainesville, Florida, she has spent her childhood days practicing ballet and after a time she moved to the United States and later on after her graduation she moved to Los Angels and started working as a model and actor.

She has been seen in many TV show and over she sign for WWE, Where she is playing Russian language character. She appeared in the ring in the year 2016 for the first time.

Alexa is one of the toughest athletes, she started her wrestling space in the year 2013 and has achieved a lot of success and victory in her life over a short period of time. Alexa is also known for her fitness as in each competition she grows different.

She is also a three-time champion and twice won the tag of the championship and she has a huge fan following of her and she enjoys it.

Nikki Bella is born in California before getting into wrestler she was a model and actress, Later on, after many years.

She signed a contract with WWE in 2007 and she becomes one of the best championships and she has a very successful career in her wrestling. She is one of the hottest Diva Championship one could know.

Maryse is born in Montreal and currently, she leaves in California, she began her career in modeling.

Torrie Wilson is born in Boise she grew up as a cheerleader, also she has an interest in modeling. She appeared in WWC in 1999. Also, she has different storylines in her different games. Torrie has also been seen in many magazine cover like playboys.

She is born in Canada she is one of the most beautiful wrestlers one could see, She started her career as a football player and in hockey.

She has been one of the toughest players and she has a huge fan following. Trish also became a part of three with Stacey Keibler and Torry Wilson. She set a perfect example for all upcoming generations.

Peyton Royce is an Australian wrestler and model, she works with Billie T as a duo before signing with WWE in 2015 she toured the independent circuit. Currently.

She is been working in video game characters in the year 2019 and 2020, she is been doing well in her career.

A J lee is one of the prettiest divas she first uses to play wrestlers as part-time and later on she turn her passion into a dream.

She works really hard for it which is worth it to her now and she has a good profession and good career going on and she is married to CM Punk.

Rosa is been in WWE since 2006, and currently this year she has been retiring. She started her career in modeling and she will join the duo partnership.