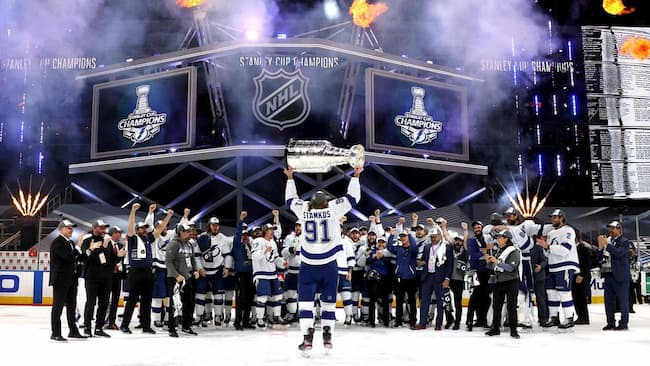 National Hockey League (NHL)  is a professional ice hockey league in North America consisting of 32 teams with 25 in the USA and 7 in Canada. So Check 10 NHL Players Of The Season 2021/22.

The NHL is full of talent. Veterans to young stars, there is a ton of stars that are playing in the best hockey league in the world. But who are the best of the best, the top NHL players?

Let’s take a look at the top 10 NHL players in the NHL on this page.

t’s not common to see a goaltender in the top 10 list, but what Andrei Vasilevskiy of the Tampa Bay Lightning did last season was extremely impressive.

The Big Cat won his second-straight Stanley Cup, was awarded the Conn Smythe Trophy, and narrowly missed out on another Vezina. He notched a shut-out in each of the four series-clinching games in the postseason.

In the postseason, he boosted those numbers to 1.90 GAA and .937 SV%. Vasilevskiy is far and beyond the best goalie in the league and worked himself into a top 10 player discussion.

David Pastrnak missed the beginning of the regular season, but then was a point-per-game player for the Boston Bruins. He had 48 points in 48 games. It wasn’t his best season, but he is the Bruins’ best pure goal scorer and still a threat on the right side.

He has some of the most skill in the league and at only 25 years old, he’s only going to get better.

Speaking of left-wingers, Alex Ovechkin is the top guy on the left side and the best goal scorer in the league. Alex had a bit of a down year, but he did miss 11 games in the shortened season. He finished with 24 goals and 18 assists and has 730 career goals

Another superb Russian winger, Nikita Kucherov missed the entire regular season last year with a hip injury. People were unsure how he would fare in the playoffs having missed so much time.

Well, he answered with 32 points in 23 games en route to the Lightning’s second Stanley Cup win in as many years. He had 24 assists in the postseason to lead all skaters. Kucherov is already a Hart, Ted Lindsay, and Art Ross winner. He is the best right-winger in the NHL right now.

Sid the Kid continues to produce. The Pittsburgh Penguins captain had 24 points and 38 assists, good for 62 points in 55 games. Crosby has yet to register a season where he is under a point per game.

He was a finalist for the Ted Lindsay Trophy this season, so his peers still regard him as one of the top players in the league. He does it all on the ice at both ends and in addition to being a top leader in the locker room.

Austin Matthews took that step forward this season and really broke out. He led the league with 41 goals this season in just 52 games and absolutely absurd pace. Mind you, this is while dealing with a wrist injury.

Matthews is becoming a top goal-scorer in the league. He’s only 23 years old, yet already has 199 goals in 334 career games. He certainly needs to figure out his postseason woes, but he has one of the quickest shots in the league.

The German center benefits greatly from playing with McDavid on the power play, but hey, they don’t ask how, they ask how many. Maybe all of the Oiler’s moves this offseason will benefit Draisaitl and McDavid finally.

Nathan MacKinnon had a slow adjustment to the NHL, but boy is he one of the most fun guys to watch. He zips around, stick handles through everyone and isn’t afraid to lay a guy out or two.

He finished eighth last season in points with 65, and that’s including missing eight games. MacKinnon has become the forefront of a Colorado Avalanche team that has been one of the best teams in the league the last couple of seasons and he’ll continue to produce at a high-level

What can I say? Connor McDavid is a cheat code. It’s hard enough to hit 100 points in the NHL and that’s in the normal 82-game regular season. McDavid hit it playing in the shortened 56-game season.

He had 33 goals and 72 assists for a total of 105. That’s video-game numbers. He rightfully swept the Ted Lindsay and Hart. His speed combined with his ability to handle the puck so flawlessly and find his teammates is unmatched. Oh, and he’s only 24 which puts him in an elite position to dominate the NHL.