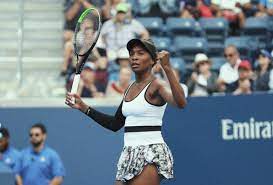 Venus Williams, a seven-time grand slam champion, defeated a contestant who was less than half her age on Monday in the Auckland Classic’s opening round with a vintage display.

The 42-year-old, who was playing in her first match in four months, found some of her signature power to record her first victory in more than a year, adding yet another chapter to a professional career that has already reached its 27th season.

When play was halted, Volynets, who turned 21 on New Year’s Eve, was winning the first set tiebreaker. However, as the match dragged on into the evening, Volynets lost steam.

The former world No. 1 received a wildcard entrance to competitions in Auckland and Melbourne, and she will use this week to get ready for her 25th appearance at the Australian Open.

Even if it didn’t feel like way at the moment, she acknowledged the stoppage was to her advantage.

When you’re fired up and then have to stop, it’s difficult “Williams, whose most recent match ended in a loss in the US Open’s first round, said this.

“I was furious at the rain delay. I’m going to attempt to change my mentality because my coach and I could hardly communicate.”

While Volynets, a qualifier ranked 114th, was playing Williams in the second set, Williams, who has dropped below the top 1,000 in the rankings, showed flashes of her former class and some respectable fitness.

The event is being held for the first time in three years; Venus’ younger sister Serena Williams, a retired star, won the 2020 edition.

America’s top seed and No. 7 in the world On Tuesday, Coco Gauff launches her campaign.

It is likely that Chetan Sharma will continue to serve as the BCCI’s chief selector: Sources