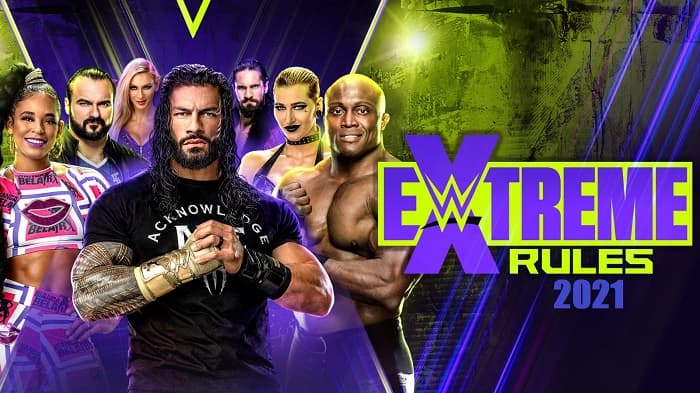 Extreme Rules 2021 is an event produced by WWE which is a professional wrestling pay-per-view and WWE Network event. The event is for the Raw and SmackDown brand divisions. The fixtures for the season were hosted at the Nationwide Arena in Columbus, Ohio. Check WWE Extreme Rules 2021 Results, Winners List, Repeat Telecast Details.

The fixtures have been done and the results, winner list for WWE Extreme 2021 are out now. Also, the fixtures for the game are moving forward. Check out more details about the WWE Extreme Rules 2021 Winners List, and repeat telecast details here on this page.

Check out the winner’s list for the WWE Extreme Rules 2021 here on this page. Also, Check Here the Top 10 Hottest WWE Female Superstars.

Liv Morgan defeats Carmella in the pre-show by pinfall in the singles matches as the time is 7:52. In the second match, ‘The New Day’ defeats Bobby Lasjhley, Omo, and AJ Styles by pinfall. During, the third match ‘The Usos defeats The Street Profits where the stipulations are Tag Team Match for WWE SmackDown Tag Team Championship by 13.45.

In the fourth match, Charlotte Flair defeats Alexa Bliss by pinfall and in the fifth match, Damian Priest defeats Jeff Hardy and Sheamus by pinfall.

One match ends up in no contest between Becky Lynch vs Bianca Belair. Roman Reigns defeats The Demon Finn Balor by pinfall.

The matches are streaming live on the official broadcasting partners of the league. The matches streaming on the Sony Pictures Network.

The repeat telecast of the fixtures will also be available on the Sony Liv app to enjoy at any time and from anywhere.