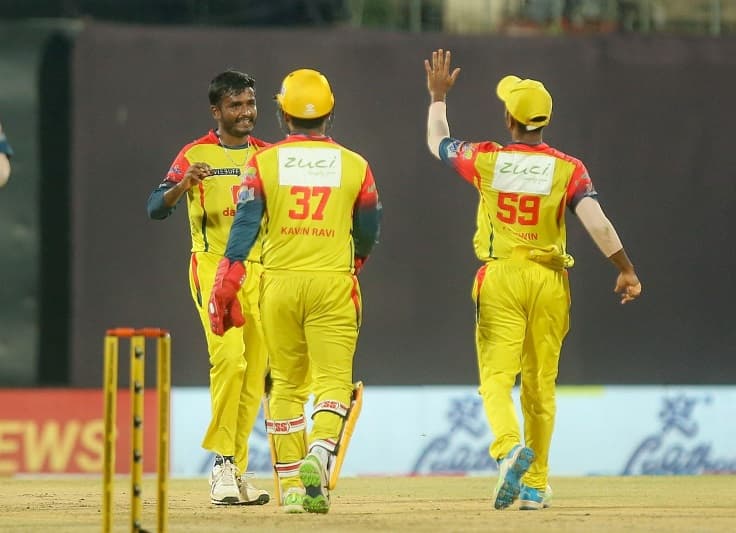 Sathish, the veteran of many battles, put his hand up when it mattered most by smashing 64 off 32 balls (4 fours, 4 sixes) to guide the defending champions to 159 for 7 wickets in 20 overs. The Chepauk bowlers then complimented his efforts by restricting Kovai Kings 123-9 in 20 overs for a 36-run win.

It was Chepauk’s fourth win from six matches (9 points) and it not only propelled them to the top spot in the eight-team table but they also became the first team to enter the Playoffs. Kovai Kings continued to stay put at the sixth spot with five points from six matches.

Chepauk, who were struggling at 44-4 in the 9th over was spurred by Sathish and left-hander Ravisrinivasan Sai Kishore’s (31 off 27 balls, 2 fours, 1 six) rollicking partnership of 68 runs off 41 balls. The 25-year-old Sai Kishore, promoted up the order, was content playing second fiddle to the 40-year-old Sathish, whose contribution in the alliance was worth 46.

Sathish revealed he was keen to make up for lost opportunities to score in the earlier games. “I just thought of taking my time to settle in because I had my chances in previous games but I was in a hurry. So I thought I’d take it deep today and it worked,” he said.

The Kovai batsmen’s response appeared to depend heavily on young Bhardwaj Sai Sudharsan (5), but when he was run out carelessly, not grounding his bat, they were in trouble. Captain Musa Shahrukh Khan (26 off 17 balls, 4 fours, 1 six) tried to infuse some life into the innings with some big hits but he too perished, hitting a full toss from left-arm spinner Ramadoss Alexandar high and into the hands of Sonu Yadav.

Sai Kishore once again turned in a sterling performance with the ball claiming two wickets for 11 runs from his four overs. The lanky spinner, who is the highest wicket-taker in the tournament, increased his wickets tally to 50 from 36 matches. The milestone could not have come at a better venue for the bowler as it was the 50th match of the tournament at the MA Chidambaram Stadium.

All-rounder Abhishek Tanwar (29 off 13 balls, 3 sixes) delayed the inevitable for Kovai with some lusty hits but it did little to alter the result.

Left-arm spinner Manimaran Siddharth (1-18) and Harish Kumar (2-15) also came good with the ball to cap a happy outing for Chepauk.

Earlier, Kovai Kings appeared to justify Shahrukh Khan’s decision to bowl after winning the toss, when they claimed the top four Chepauk batsmen cheaply. Left-arm spinner N Selva Kumaran (2-11) did most of the damage claiming the prized scalps of opener Narayan Jagadeesan (9) and all-rounder Jaganath Sinivas (7).

Just when it seemed Kovai Kings were tightening the screws, Sathish broke the shackles. That Chepauk added 115 in 11 overs is an indication of the impact made by Sathish.

Tanwar gave a good account of himself amidst the onslaught to claim 2 wickets for 26 runs in his four overs of medium-pace.

Shahrukh Khan was taken aback by the failure of his batsmen to rise to the occasion. “I didn’t expect us to succumb so much under pressure, we should have played like we would against any other team. The build-up to this game was a lot and the character of batsmen is shown only when you play big teams in big games. We succumbed to the pressure, nothing else,” he said matter-of-factly.

The Kovai captain wanted his team to focus on their final league match against Nellai Royal Kings on Sunday as they still have a chance to make the Playoffs “The next game is a must-win game, so we shouldn’t make the errors we made tonight, it’s as simple as that,” he said.