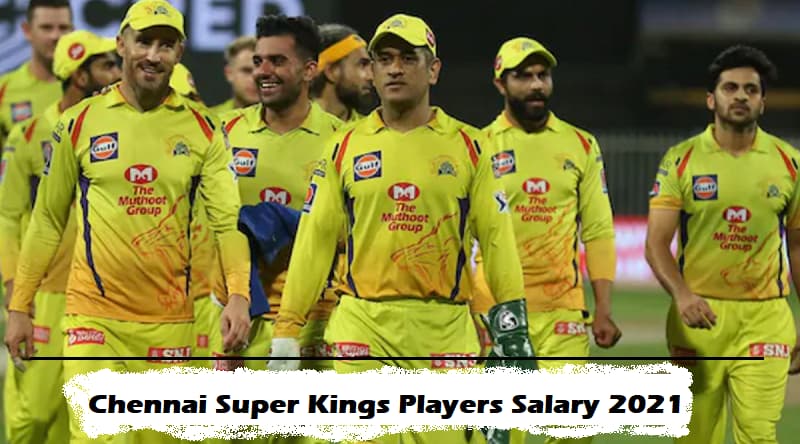 The Chennai Super Kings which is also known as the CSK it is a cricket team based in Chennai, Tamil Nadu that plays in the Indian Premier League the team was founded in the year 2008. They are one of the most famous teams as they won the IPL title thrice in the year 2010, 2011, and 2018 and they have the highest win percentage of matches among all the teams in IPL. Check CSK Players Salary 2021, Highest Paid Players of Chennai Super Kings.

The brand value of the Super Kings in 2019 is estimated to be around Rs. 732 crore (roughly $104 million) making them one of the best valuable IPL Franchise. Being such a good team and winning the most title the players also get a good amount of Salary each player are paid well amount of salary and if the matches win the Salary gets double by 5% or more than that. So now let’s check out the complete details about Chennai Super Kings Players Salary 2021, Highest Paid Players.

As mention above CSK is one of the best and popular teams the players are very hard working and always give their best in matches also there are many new members who are added to the team and some old who ended up leaving the team which depends upon their contract and salaries basis. So below let’s check out the complete list of Chennai Super King Squads.

M.S Dhoni gets one of the highest salaries from Chennai Super Kings we all know M.S Dhoni he is one of the greatest batsmen of the Indian team who had captained the Indian national team in the year 2007 to 2016 in limited-overs formats and under his captaincy India won the title of ICC Twenty20 and in 2010 and 2016 Asia cups, 2011 ICC Cricket World Cup and many more other things.

M.S Dhoni’s net worth is in crore rupees he is the highest-paid batsmen and CSK pays him 15 crores for every season, Whereas in IPL he receives Rs. 152.8 Cr he has to own his earn value and brand and because of it, he is paid higher amount as compared to other players also if they won the match or if some additional happens their value gets increase by 30% and in every three to four years their salary also gets increase by 5% the cricket players live their luxurious life as they dream it because they earn a lot of money from their every match and IPL season.