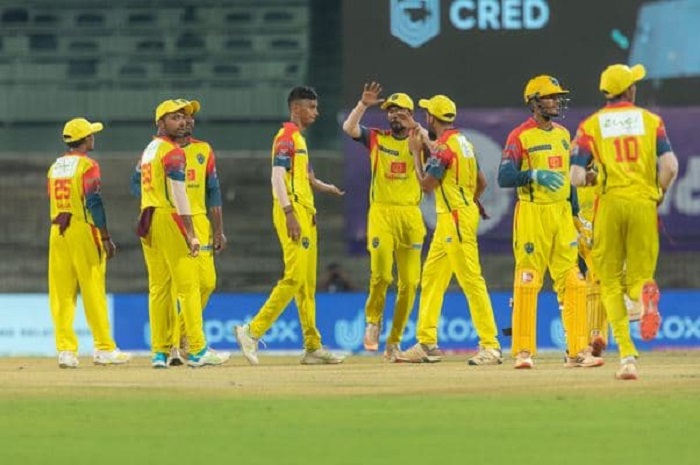 In the Eliminator at the MA Chidambaram Stadium on Wednesday, Vivek smashed a belligerent 52 not out off 26 balls (1 four, 6 sixes) and Hari Nishaanth struck a superb 59 off 44 balls (5 sixes) to help Dindigul chase down Kovai King’s target of 144 in 17.3 overs. The last season’s finalists ended on 144 for 5.

Dindigul will take on defending champions in Qualifier 2 on Friday in a rerun of the last season’s final. An elated Hari Nishaanth has already set sights on the impending battle against Chepauk. “I’m very happy but

there’s no time to relax. We can enjoy it for a short while as we have to be ready for Qualifier 2. We have to pull up our socks for the next game because this tournament does not give us much time,” he said.

Reflecting on his performance, Nishaanth revealed his plan was to bat until the finish, which he almost did before getting dismissed in the 17th over with Dindigul six runs away from victory.  “My role was to bat till the end because I have the belief to finish games and I should have stayed not out but that’s okay, I will learn from it. So the plan was that I would take it deep and the guys would bat around me,” he said.

Hari Nishaanth anchored the chase to perfection for his 10th fifty in the tournament. In the process, he became the sixth batsman to score 1,000 runs and the first left-hander to attain this milestone. Kovai Kings were in the contest until the 30-year-old Vivek came to the crease with the Dindigul score reading

53-3 in the 10th over. Thereafter, all hell broke loose with Vivek and Nishaanth raining sixes. Together they struck nine sixes in a rollicking partnership of 85 runs off 41 balls to take the game away from Kovai.

Off-spinner Umashankar Sushil was the only bowler to escape the onslaught and returned respectable figures of 4-0-24-1 in an otherwise sorry card for the Kovai bowling.

Earlier, Bhardwaj Sai Sudharsan, who had hit a grey patch after a series of big scores, returned to form with a sparkling 57 off 40 balls (3 fours, 2 sixes) to lift Kovai Kings to 143-6 in 20 overs. On a pitch where bowlers had a bigger say, the 20-year-old Sudharsan stood out with his batting display to notch his fifth half-century in the tournament. He swelled his run tally to 353 runs and maintained his top position in the batting chart. After being put in to bat, Kovai Kings were struggling at the halfway mark with just fours in a total of 49-3. But in

the next 10, they kicked on to add 94 runs. Sai Sudharsan was at the center of this revival along with his captain Musa Shahrukh Khan (28 off 22 balls, 2 fours, 1 six) as they raised 62 runs off 42 balls for the fifth wicket.

Left-arm pacer Gurjapneet Singh (3-22) was the pick of Dindigul bowlers along with left-arm spinner Munnusamy Silambarasan (1-23). The 23-year-old Gurjapneet was brilliant in the death overs mixing the slower deliveries well to fox the batsmen.

Sai Sudharsan felt the pitch fared better for batsmen in the second half and it was Vivek Raj, who turned the tables on them. “I would say the wicket got better for batting but when we batted they were very disciplined with their bowling and the ball was also holding a bit. 144 is a winning target, we thought and we did start well by getting two wickets in the Powerplay but after that Vivek Raj’s innings was much the difference,” he said.

Upstox Most Valuable Player of the Match: Gurjapneet Singh