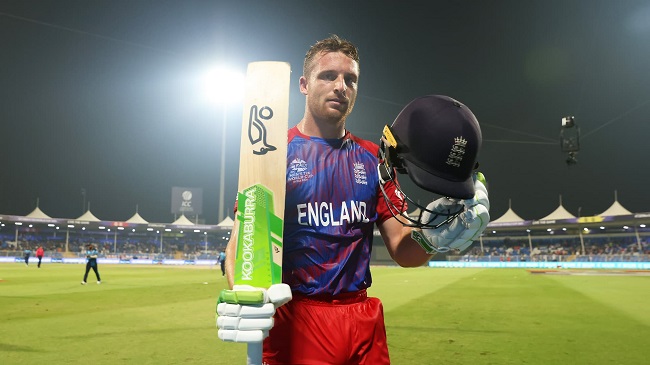 ICC T20 world cup is going on and Jos Buttler proves their performance against Sri Lanka in a super 12 match of the T20 World Cup.

Sri Lanka faced the number one ranked England. Chasing the target of 164 runs, Sri Lanka’s team was all out for 137 runs in this match.

In this way, England beat Sri Lanka by 26 runs, as well as have qualified for the semi-finals with glory with help of Jos Buttler’s score.

He also became the first player to score a century in this tournament. He scored the first century of his T20 International career against Sri Lanka.

He returns unbeaten on 101 off 67 balls. He hit 6 sixes and as many fours in his unbeaten innings. Later he also revealed the secret of his success.

‘I think I could have played this innings if I had not lost my patience. It was difficult in the beginning but the partnership with Eoin Morgan was good. It was getting tough to face the spinners but we thoroughly enjoyed batting’.

Jos Buttler’s 2 thousand runs were also completed in T20 Internationals and he is only the second batsman from England to do so. Captain Eoin Morgan was the first player to do so.

Butler is the second England batsman to score a century in the T20 World Cup. Earlier, Alex Hales had scored an unbeaten 116 against Sri Lanka in 2014.

Buttler said Regarding completing a century by hitting a six,

‘I was trying to guess what kind of ball he (Dushmanta Chameera) would bowl. I was completely calm but due to being on the crease for a long time, I could play that shot’.