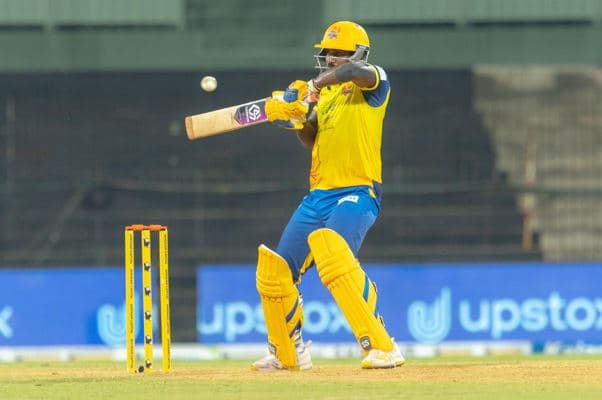 Srinivasan struck a fluent 60 off 48 balls (5 fours, 2 sixes) and wicketkeeper Mani Bharathy hit 30 off 24 balls (3 fours, 1 six) as Dindigul ended up with 147-5 in 20 overs. When wicketkeeper Bharathy joined Srinivasan, Dindigul was in trouble at 2-8 in the third over. But they put their heads down to defy the rival attack by raising 85 runs off 63 balls for the third wicket. The 36-year-old Srinivasan played the guiding hand in this alliance which was broken when Bharathy was stumped by Baba Indrajith off left-arm spinner Sanjay Yadav (1-28).

All-rounder Vivek Raj too chipped in with a useful 32 not out off 23 balls (2 sixes), putting on 29 runs off 17 runs for the unbeaten fifth wicket with S Swaminathan (3 not out).

Fast bowler Athisayaraj Davidson stood tall in the Nellai bowling attack claiming two wickets for 23 runs to swell his tally in the tournament to 47 wickets.