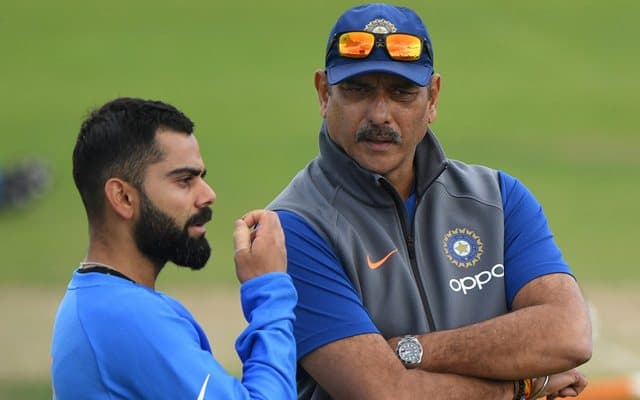 ICC T20 world cup 2021: Team India, who were out of the semi-final race in the ICC T20 World Cup 2021 under the leadership of Ravi Shastri and Virat Kohli.

In this match, Virat Kohli, who came to captain for the last time for the team, ended the tournament with a victory.

This is the last match of both legends on the Indian Team, they sign off with a victory against Namibia.

In this match, Indian captain Virat Kohli won the toss and decided to bowl first. Rohit Sharma shared an 86-run partnership for the first wicket with KL Rahul.

This was proved right by the bowlers, The target of 133 runs from Namibia was easily achieved. Opener Rohit Sharma completed his half-century in just 30 balls in this match.

Rohit Sharma played a fast-paced inning of 56 runs and returned to the pavilion after being caught on the ball of Freelink.

This was Kohli’s last match as captain of the T20 format. Whereas in place of Ravi Shastri, Rahul Dravid will take over the responsibility of the head coach.

Jadeja and Ashwin show there magic

In this match, Jadeja and Ashwin took three wickets each while Jasprit Bumrah took two wickets. Craig Williamson became a victim of Ravindra Jadeja without opening an account.

At the same time, Stephen Bard (21 runs) was also dismissed leg before by Ravindra Jadeja.

David Visa (26 runs) was sent to the pavilion by Bumrah. Rahul Chaha could not leave any impact in the match.

He is not able to manage single wicket while conceding 30 runs in the bowlers of 4 overs.