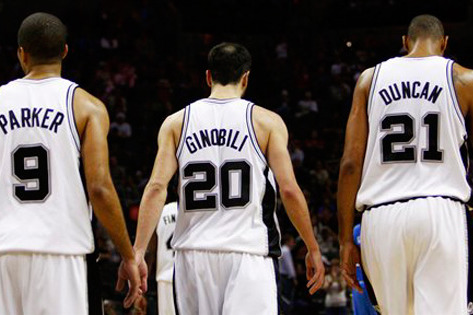 A couple of months ago, you might have heard people talking about The Big Three in Spurs. If you are a big San Antonio fan, you should already know what the term means, but everyone else would be rightly confused!

Today, we are going to explain why they are so important and what the term actually means!

What Is “The Big Three”?

The Big Three is a reference to NBA basketball players Tim Duncan, Manu Ginóbili, and Tony Parker. The trio worked together on the court from 2002 until 2016 and brought teamwork back into the frontline of the sport.

To many people, basketball had turned into a glamorous sport that focused on one player (like LeBron) over the team as a whole. The Big Three brought back the importance of teamwork.

During their reign, Spurs won four NBA Championships between 2003 and 2014. The wins could only be attributed to Ducan, Ginóbili, and Parker’s ability to play off each other and utilize their teammates’ skills.

The Big Three day isn’t an official holiday or even a date advertised by Spurs. Instead, a bunch of fans and even Commissioner Justin Rodriguez noted that the dates lined with the players’ jersey numbers.

With so much hype and love for the trio, all of the Spurs fans decided to celebrate The Big Three and drink to the memory of beautiful basketball.

The next supposed celebration date will be in 100 years’ time, on September 20th, 2121. By then, we hope that fans of the future will still note the time when teamwork was prized over individual talent.

The Original Spirit of Basketball

Basketball purists have criticized recent games as being all show. They say that each team cares about one player’s successes, and coaches aim to boost one player to carry the rest of the squad. In all honesty, it is kind of true.

When you read articles about the best games, they always mention players and their talent but not the overall team and how they work together.

That’s when The Big Three came in. They proved to the world that teamwork is what will break up a heavy line of defense, that teamwork can bring more points than stupidly focusing on one player, and they proved that practiced teamwork creates a game of control.

Tim Duncan, Manu Ginóbili, and Tony Parker brought back the original spirit of basketball. Look through any of their videos, and you will see the effortless glide of the ball. Everything looks choreographed to perfection, and their opponents can do nothing but turn their heads.

Every game they played was beautiful and precise. We can only hope to get another trio just as talented and understanding of the game.

It all started in the 2002 to 2003 season where Manu Ginóbili joined the team. With the soon-to-be-legendary trio completed, they noticed that together with their chances of winning were better.

By the end of their first season, all three’s average points per game had increased. No longer battling each other to get the shot, The Big Three worked together, allowing one another to take the shot from a better angle. With less tension between the players (unlike other teams), the three managed to maneuver through the crowds as if they weren’t there.

This idea continued for almost 14 years, and even though they didn’t win every championship, they were the players to watch out for.

Now their legacy of teamwork and smooth playing continues in the NBA, you can see how the NBA betting odds favor more cooperative teams.

Compare seasons past with seasons present, and notice how much teamwork has been reinforced by The Big Three. May that never change.