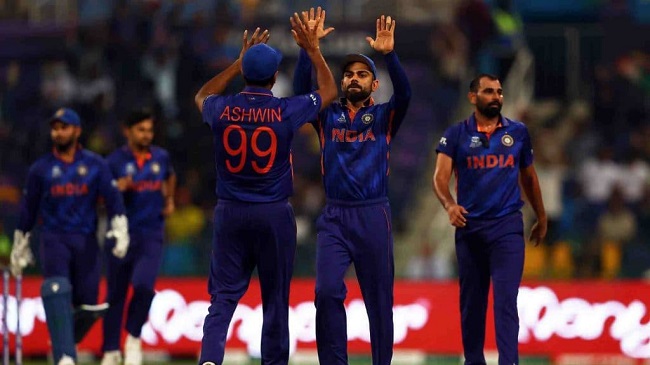 Team India is still in the race of semifinal, An interesting race is on to reach the semi-finals of the ICC T20 World Cup 2021 being played in UAE.

In which the teams of Pakistan and England have entered the semi-finals.

On other hand, there is a very interesting competition for the remaining two places from both the groups. India is also on this list.

The Semi-Final of this tournament is play on 10 and 11 November. India total play 3 matches and they only won 1 match in all these.

Team India is in the Semi-final of this tournament

The Indian team, who came out as the strongest contender in this T20 World Cup, suffered a huge defeat in both their first matches against PAK and NZ.

After which the Indian team’s hopes of reaching the semi-finals looked very low, but with India thrashing Afghanistan by 66 runs in their third match.

Securing their first win, they have somehow kept themselves in the semi-final race again. India has increased the net run rate by achieving this big win over Afghanistan.

Now if against Scotland India won by more net run rate then also they can sure there place in the semifinal.

New Zealand loss their next match

Although reaching the semi-finals will not be so easy for India, but the Indian team cannot be considered out of this race at the moment.

Because India wins both their remaining matches from here by a big margin, then India will have 6 points with a good net run rate.

This will not be enough for India and they will have to pray so much to the team of Afghanistan or Namibia that they beat the team of New Zealand.

India’s net run rate will be better than both New Zealand and Afghanistan teams,

If we see this points table then the condition of the Indian Team is not so good, if they want to participate in semifinal then they have to increase there run rates.