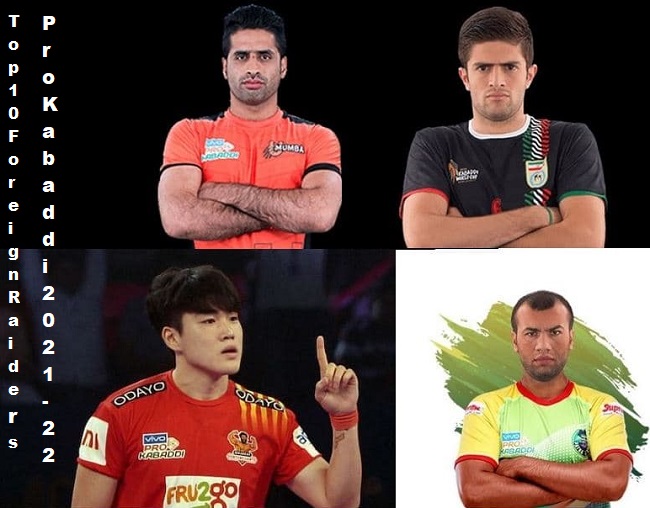 Pro Kabaddi League 2021 has started with the fixtures for the league. The tournament is all set on returning to the league after a span of two years in between. Check Top 10 Foreign Raiders in Pro Kabaddi 2021-22.

The matches for the league will be taking place behind the closed doors where the fixtures have started for the tournament. The entire tournament will be hosted at the Sheraton Grand Hotel where the 12 teams of the Pro Kabaddi League will be giving the best of their gameplays.

Here are the details about the Top 10 Foreign Raiders in the Pro Kabaddi League 2021-22. The details are listed below take a look at the updates here on this page.

Mohsen is an Iranian player and a foreign raider in the Vivo Pro Kabaddi League. He is popular for marking his records in matches. The player has a score of 36 tackle points and 76 raid points.

Farhad is a popular player again from Iran where he has given the best of his scores in the game. There are records to his name where he has been a part of 62 matches. These matches were played by him by the side of Telugu Titans.

There was a total score of the player of 153 points and has a tackle point of 79 in 62 matches he rolled out.

Abolfazl Mahali is a popular player who is a foreign player again from Iran where he has made a great core in Vivo Pro Kabaddi League. He has made his debut in the game during season 3 of the game.

The player is from the game of U Mumba currently, However, the player has been a part of the teas like Dabang Delhi and Patna Pirates right now.

Mohsen is an Iranian player who is a part of the team Telugu Titans who rolled out his matches in the 6th season for the league. He is regarded as the brilliant player in the game where he is also regarded as the all-rounder.

He has a score of 29 raid points where he also has 27 tackle points.

Hadi is also an Iranian player who is a foreign raider in the team. He is a Patna Pirates team player who is popular for the game. He has made a total of 72 games in which he has 109 tackle points.

The player has been a part of the teams like Gujarat Giants and U Mumba. He makes a debut in the third season of the league.

Mohammed Taghi is a foreign raider in the popular franchise of Vivo Pro Kabaddi League UP Yoddha. He was previously a part of the franchise Bengal Warriors where he made it to the winning for the team.

The player is currently a part of UP Yoddha and he is continuing to play the matches for the league. the fixture starts to roll out with he gets to play rarely. As he is not a part of the team as a regular 7.

He plays often in the game making it to the best of his game in the team.

This season is improved changes where the player is bagged by the Dabang Delhi KC.

Emad is a raider from Iran where he impressed the management a lot and they have bagged him for the game.

The player has been bagged for the Haryana Steelers for the new season.

The South Korean raider is a part of the Vivo Pro Kabaddi League team Bengaluru Bulls. The player is a raider who plants his gameplay in the team. He started his journey in the Pro Kabaddi League during season 5 of the tournament.

The player has been bagged by a different franchise every season since his debut for the league. Dong Geon Lee was a part of Tamil Thalaivas for Season 05. For season 6 he becomes a part of Gujarat Giants.

Following season 7 he becomes a part of team U Mumba. Currently, in season 8 of the league, the player is a bag by Bengaluru Bulls.

From the total of 34 matches, he played the player has bagged 80 points to his name.

One of the top raiders in the game is the Iranian player Abolfazl Maghsodlou. The player is a part of the game since season 03 of the game.

The player has made it to the long journey in the game with 47 matches and 152 points for the league.