West Indies is in trouble after losing the T20 world cup, way of WC 2022 is tough 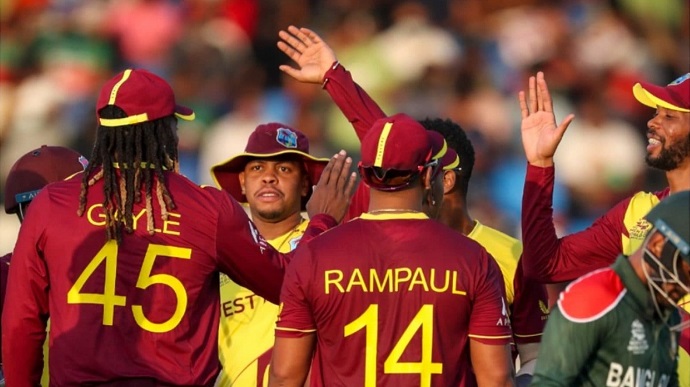 T20 World Cup 2021 was no less than a nightmare for the defending champion West Indies. With the West Indies.

who won the T20 World Cup title twice, being eliminated from the semi-finals, another bad news has created problems for the Caribbean players.

WI is the former winner of this world cup. after losing its last match against Australia, their way to WC 2022 become tough.

Group 2 two teams are former winner and in bad condition

Both the teams did a disappointing performance in the World Cup, don’t know what is the reason behind this.

Sri Lanka team could win only 2 out of 5 matches but West Indies got only one win in luck. The West Indies team has to bear the brunt of the embarrassing performance in the T20 World Cup.

The young players of the Sri Lankan team, which is going through a change, definitely bumped into other teams.

Despite this, some matches did not go in his favor. Due to this, the team will have to play a qualifying round match with the West Indies for the T20 World Cup to be held in Australia next year.

Group 1 these teams are in a strong position

In group 1 Pakistan is on top of the points table. On sun NZ defeated AFG and qualify for Semifinals. but we are talking about WC 2022.

The qualifiers for the Super 12 stage of the tournament for next year’s T20 World Cup will be the next six top-ranked teams.

Apart from the winners and runners-up of the current T20 World Cup. According to the ranking, Bangladesh and Afghanistan have decided to enter the Super 12 stage of the T20 World Cup.

But after losing to Australia in their final group match on Saturday, the West Indies slipped to 10th place in the ICC T20 rankings.

At the same time, Sri Lanka occupies ninth place. Bangladesh is eighth, while Afghanistan is in seventh place.

Bangladesh is on top of West Indies

England, Pakistan, India, New Zealand, South Africa, and Australia are the top six teams on the basis of rankings till Saturday. At present, these places are not likely to change till November 15.

England, Pakistan, India, New Zealand, South Africa, and Australia are the top six teams on the basis of rankings till Saturday. At present, these places are not likely to change till November 15.

The West Indies team had lost four out of five matches in the Super 12. Apart from West Indies and Sri Lanka.

The teams of Namibia and Scotland, who played in the Super 12 stage this year, will also play in the qualifying round matches for next year’s World Cup.