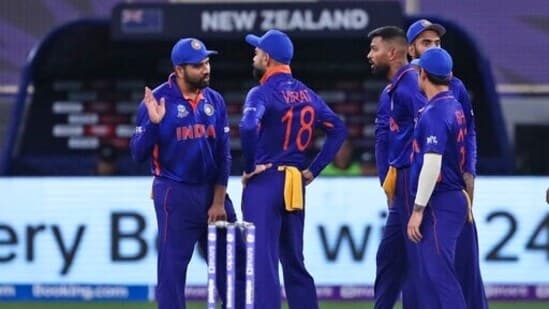 In the 40th match of the ICC T20 World Cup 2021, Afghanistan faced New Zealand. If anyone had the most eyes on this match, then it was the Indian Team.

The semi-final ticket was to be cleared by the decision of this match. But the Kiwis won this match by 8 wickets and made it to the semi-finals.

Indian team is in shock after the loss of Afghanistan. After winning the toss and opting to bat first, the Afghan team had a very poor start.

Afghanistan’s opening pair could not last long in the face of New Zealand’s pace attack. The team could only score 23 runs in the power play while its 3 top-order batsmen returned to the pavilion.

In such a situation, Najibullah Zadran won the hearts of not only Afghans but also Indian fans by his explosive batting,

Under his leadership team was moving towards a big score, but as soon as he returned to the pavilion, the team could score only 124 runs at the loss of 8 wickets.

Mujeeb gave the first blow to New Zealand, he dismissed Daryl Mitchell for 17 runs on a total of 26 runs for the team.

When Najibullah, the highest scorer of this match, came to the crease, Afghanistan had lost the wickets of Hazratullah Zazai, Mohammad Shahzad, and Rahmanullah Gurbaz.

At the same time, Gulbadin Naib also returned to the pavilion after getting out at the hands of Ish Sodhi. But Najeeb, passing time on the wicket, hit the weak balls fiercely.

In this match, Mitchell Santner, who was on the target of Najeeb, hit 2 deafening sixes in his one over. Najeeb scored the second and sixth half-century of his T20 career.

Trent Boult took the most three wickets for the Kiwi team. Apart from this, Tim Southee got two wickets. While Milne, Jimmy Neesham, and Ish Sodhi got one wicket each.

Team India is no longer competitor of semifinals

Indian fans have a lot of expectations from Afghanistan, because if AFG defeated NZ then India surely get entry in the semifinals against Pakitsan.

NZ is higher than the Indian team in the points table and in the run rate. Indian team thinks that if AFG beats NZ then it is beneficial for Team in Blue.