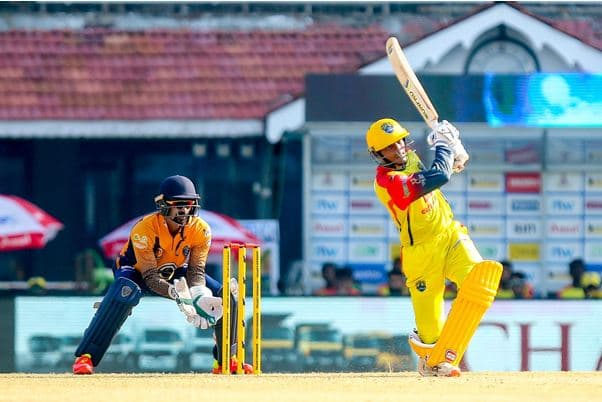 After their captain Musa Shahrukh Khan had held center-stage with the bat and helped them raise a total of 169, their bowlers were tested to the limit by the Nellai batsmen. However, the seasoned Abhishek Tanwar stepped up with a stingy over to nail Nellai, who fell short by seven runs. They ended up on 162-8 in 20 overs.

Nellai wicketkeeper-batsman Baba Indrajith (49 not out off 35 balls, 2 fours, 3 sixes) fought a valiant battle for Nellai but it was not enough.

Kovai Kings ended their league engagement on a high to finish with 7 points from 7 matches, the same as Nellai but nosed ahead on account of a better run rate. While Kovai had an NRR of -0.088, Nellai ended up with -0.485, which pushed them down to the fifth spot.

Shahrukh was over the moon after the win. “It feels good, the way we qualified after a not very consistent tournament, the way we came back was good,” he said.

At one stage, Nellai appeared to be heading for a thrilling win when Jitendra Kumar (20 off 9 balls, 3 fours) creamed 17 runs off pacer R Divakar’s over. It left them with a target of 29 off 18 balls. But Tanwar conceded just five in the 18th and Divakar recovered to give away six in the 19th, leaving a stiff 18 to get in the final over with Indrajith at the crease. But Tanwar bowled four balls without conceding a run to seal the contest, although Indrajith hit a six and a four off the final two balls, it was too little, too late.

Spinners S Ajith Ram (1-34) and U Mukilesh (2-6) too chipped in with wickets at crucial times to keep the rivals in check.

Earlier, it was a battle between captains Shahrukh Khan and Aparajith with the former having a bigger say in the proceedings. Kovai Kings batsmen stepped up to the crease with intent after Shahrukh had won the toss and decided to bat first.  Opener V Ganga Sridhar Raju (30 off 19 balls, 4 fours, 1 six) and J Suresh Kumar (36 off 35 balls, 3 fours) raising 41 runs off 30 balls, but that was when Aparajith turned the tide for the side with a brilliant spell of off-spin bowling. The 27-year-old Nellai captain claimed three

left-handers, Raju, Bhardwaj Sai Sudharsan (0), and debutant MA Atheeq Ur Rahman (3) to finish with a superb analysis of 4-0-13-3.

At 76-4 in 12 overs, Kovai was in a spot of bother but Shahrukh powered their fightback with a crackling 64 not out in 29 balls, which included five fours and five sixes. In eight overs, Kovai added 93 runs to finish on a high.

Atheeq was the 25th player to make his debut in the tournament this season and it proved to be a good outing for the 24-year-old all-rounder.

Dream 11 Game Changer of the Match: U Mukilesh (LKK)

Upstox Most Valuable Player of the Match: Baba Aparajith (NRK)