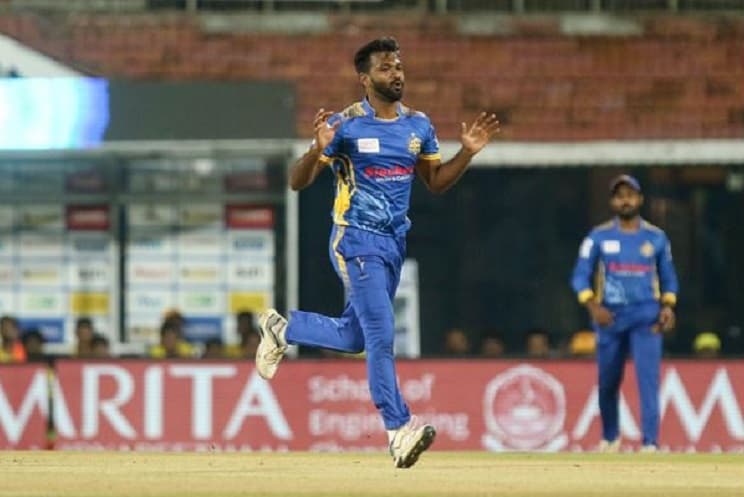 After captain NS Chaturvedi won the toss and put Dindigul into bat, his bowlers led by the experienced pacers Rohit Ramalingam (3-19), Jagatheesan Kousik (3-23) and R Silambarasan (2-18) restricted the last season’s finalists to 96 in 18.5 overs. Dindigul began well with their mercurial opener C Hari Nishaanth (19 off 24 balls, three fours) leading the charge as they raised 25 runs in 23 balls. But once his partner S Arun (7) was claimed by pacer Kiran Akash, they suddenly lost way losing three more wickets,

including that of Nishaanth edging pacer Rohit Ramalingam behind the wicket to KB Arun Karthik, for the addition of 15 runs.

Kousik was at the center of creating the dents in the Dindigul innings claiming two of the three wickets to fall and then nipping a partnership in the bud by dismissing RS Mokit Hariharan (11).

Wicketkeeper K Mani Bharathy (26 off 23 balls, 2 fours, 1 six) and R Vivek (11 off 13 balls, 2 fours) stemmed the rot to a certain extent putting up 27 runs for the sixth wicket. But Silambarasan claimed both in his final over and it was all downhill from thereon.