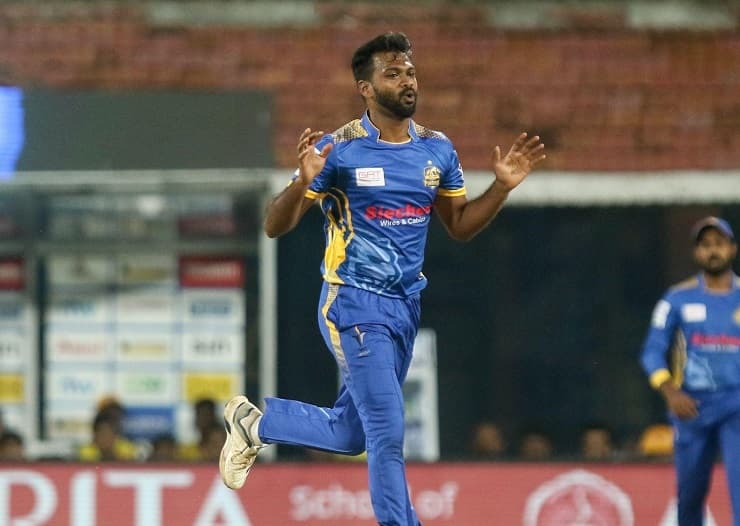 The 26-year-old Kousik first claimed three crucial wickets to break the back of Dindigul and then struck a vital 31off 26 balls (2 fours, 2 sixes) to ensure the former champions end on the winning side despite a few hiccups. Chasing 97 for victory, Madurai notched a six-wicket victory by overcoming the target in 15 overs.

But Kousik in the company of captain NS Chaturved (18 not out off 17 balls, 1 four) reined in the innings with a 43-run stand off 37 balls for the fourth wicket. Kousik did the bulk of the scoring while Chaturved was content playing an able ally.

Kousik revealed he was prepared for the situation since the pitch was helpful to the bowlers. “I expected this situation to arise as the wicket was doing a bit. I was prepared to go in early and when I went in, the runs were hard to get. But I knew that if I took the game deep, it would become better. So being aggressive helped me,” said the Coimbatore cricketer.

It was a disappointing start for Dindigul’s new captain R Srinivasan but the 36-year-old from Kancheepuram was confident his side will bounce back. “We started in a positive manner but the wicket was slow and two-paced. But its okay, we are playing after a long time and it’s only the opening game so the boys are a little rusty. We will address it and come back well in the next game,” he said.

Earlier, the Dindigul innings failed to get going after they were put in to bat by the Madurai captain. The Madurai pace attack led by the experienced pacers Rohit Ramalingam (3-19), Kousik (3-23), and R Silambarasan (2-18) did most of the damage to restrict Dindigul to 96 in 18.5 overs.

The bowlers stuck to a plan, denying them space and width to the rival batsmen and their fielders complementing them by taking smart catches.

Dindigul’s mercurial opener C Hari Nishaanth (19 off 24 balls, three fours) started well by leading the charge as he raised 25 runs in 23 balls for the opening wicket. But once his partner S Arun (7) was claimed by pacer Kiran Akash, Dindigul lost way, losing three wickets, including that of Nishaanth edging pacer Rohit Mahalingam behind the wicket to Arun Karthick, for the addition of just 15 runs.

Kousik was at the center of creating the dents in the Dindigul innings claiming two of the three wickets to fall and then nipping a partnership in the bud by dismissing RS Mokit Hariharan (11).

Wicketkeeper K Mani Bharathy (26 off 23 balls, 2 fours, 1 six) and R Vivek (11 off 13 balls, 2 fours) tried to stem the rot but to no avail. Silambarasan claimed both the wickets in his final over and it was all downhill from thereon.

Rohit Ramalingam and Kiran Akash (2-14) ensured Madurai had a modest target to chase by running through the tail.

Upstox Most Valuable Player of the Match: R Silambarasan (SMP)