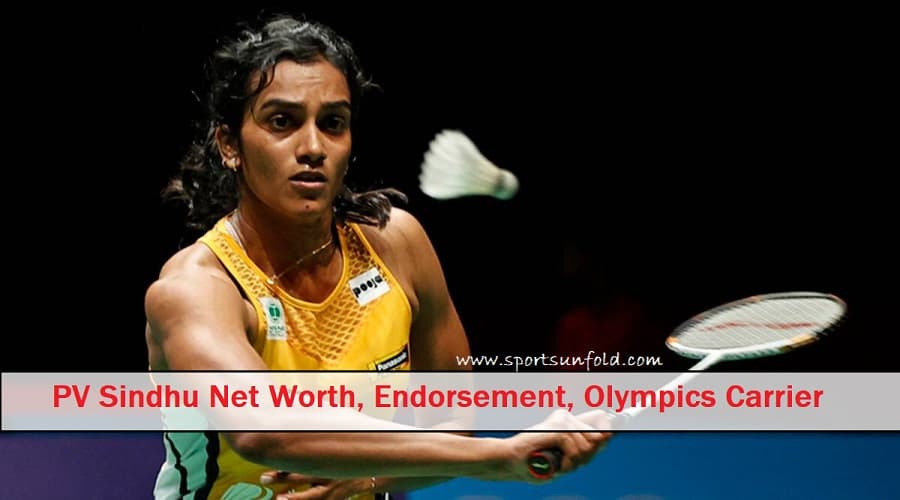 The Indian Professional Badminton player PV Sindhu is currently standing at 7th position in Wolrd Ranking. Also, PV Sindhu is the only female Badminton Player to take part in the upcoming Tokyo Olympics 2020. The Opening Ceremony of Tokyo Olympics 2020 will take place on 23rd July 2021 and the schedule will conclude on 8th August 2021. Check PV Sindhu Net Worth 2021, Endorsement, Olympics Carrier.

In 2016, PV Sindhu was featured in Rio Olympics and made history by winning a silver medal by the first female individual representing India. So the complete details related to PV Sindhu net worth, endorsements, and Commonwealth games are available here.

PV Sindhu’s Net Worth of 2021 estimates at a whopping Rs. 72 Crores INR. In years 2018 and 2019 PV Sindhu was featured in the Forbes list of Highest-Paid Female Athletes. The net worth of PV Sindhu in 2018 and 2019 estimates at $8.5 Million and $5.5 Million respectively. She is the only Indian Female Badminton player in the top 10 World Rankings. While PV Sindhu was awarded many prestigious sporting events. So Many brands approach PV Sindhu for endorsements. Not just in Badminton in other sports also Brand Endorsements played a big role in the earnings of any Sportsperson.

Current;y PV Sindhu Endorses more than 13 Brands approx. In the year 2019, PV Sindhu signed a sponsorship deal worth ₹500 Million with Chinese sports brand Li Ning for Four-year. Also, it was one of the biggest deals in Badminton sport. From which PV Sindhu will get $400 Million as Sponsorship and Remaining for the Equipment. Before that PV Sindhu signed a contract with Yonex for ₹35 Million/year from 2016 to 2018.

Apart from this, she endorses brands like JBL, Bridgestone Tires, Bank of Baroda, Gatorade, Moov, Myntra, Flipkart, Nokia, Panasonic, Stayfree, Boost, Apis Himalaya Honey, Ojasvita. While She is also Brand Ambassador of Central Reserve Polic Force and Vizag Steel. In 2017 an Economic Times Report stated that PV Sindhu is just behind Virat Kolhi in terms of Earnings from Brand Endorsements.

Ligue 1 Fixtures 2021-2022, Calendrier and Participating Teams are out