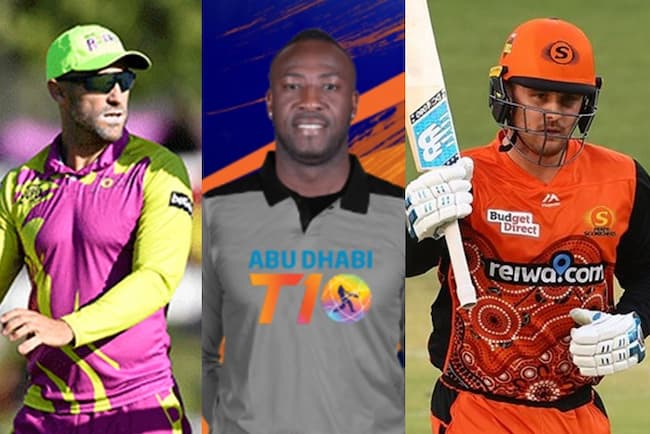 The T10 league of the game is going strong. The Abu Dhabi T10 league is already many seasons old, and the fifth season of the league will get underway on November 19th, 2021. Check Top 10 Best Players In The T10 League.

The league will consist of 8 teams, that will fight it out over the course of the tournament. The highly anticipated tournament will conclude on December 4th, 2021. There are several big names that will take part in the league this year.

Check out the top 10 players in the T10 League

See Below Details Top 10 Players in the T10 League.

He is a bowler who can trouble even the best batsmen in the game. Mujeeb is a man who bowls tight lines, is very economical, has subtle variations up his sleeve, and is someone against whom the batsman cannot score easily. The 19-year-old spinner will turn out for the Bangla Tigers in the 2021 edition of the league. He is certainly a name to keep an eye on in the upcoming tournament.

Experienced campaigner Chris Jordan, who has taken over 250 wickets in his T20 career, will feature as the icon player of the Northern Warriors. The bowler has been the main death bowler for his country for more than 2 years and leads the England side in the T20 world cup.  The English fast bowler has recorded an impressive bowling average of 27.45 in 243 T20 matches.

Colin Ingram is a batsman who can pulverize any bowling attack on his day. The left-handed South African batsman has been in decent form in the ongoing Big Bash League and has aggregated 258 runs at a strike rate of close to 130(127.09) thus far. Ingram will render his services for the Deccan Gladiators in the 2021 edition of the Abu Dhabi league.

The hard-hitting opening batsman Jason Roy is all set to show his ball-striking prowess as the icon player of the Delhi Bulls. The Englishman has smacked over 6,600 runs in his T20 career with a strike rate of well over 140. The world cup winner has been the lynchpin of England’s team since 2015 and would be a destructive force in the tournament.

His hand plays several tricks with the ball in hand. And, he can also be destructive with the willow when the need arises as well. In short, Sunil Narine is a cricketer who is an asset to any side he plays in limited-overs cricket. Narine will feature for the Deccan Gladiators in the 2021 edition of the Abu Dhabi League. And, if he can find form, not only will bamboozle batsmen with his guile, he will also strike some lusty blows with the willow.

With over 500 sixes to his name in T20s, the West Indian superstar Andre Russell will feature as the icon player of the Deccan Gladiators. The hard-hitting all-rounder has racked up more than 6,000 runs and 300 wickets in multiple tournaments all around the globe. He is a match-winner on his own and can change the game with his batting.

With exuberant hitting and wicket-taking abilities, Liam Livingstone will headline Team Abu Dhabi as its icon player for this season. The English allrounder has the ability to bowl off-spin as well as leg-spin and can strike the ball sweetly to all parts of the ground. The English all-rounder has smashed over 3,900 runs and picked up over 50 wickets in T20 cricket.

He is 41, but he is surely not done yet. Imran Tahir still has the fire in him to go out and deliver his leg spinners on the cricket field. Tahir is a veteran in T20 cricket. The South African spinner has picked up 63 wickets in T20I’s and has also scalped 80 wickets in IPL cricket.

Tahir will turn out for the Deccan Gladiators in the 2021 edition of the Abu Dhabi T10 league. And, apart from his leg breaks, and his well-disguised googlies, watch out for that celebratory run of his after he picks up a wicket.

The aggressive wicketkeeper-batsman Nicholas Pooran is primed to set the stage on fire as the icon player for the Maratha Arabians. The West Indian has scored over 3,700 runs in T20 cricket along with taking 108 catches and effecting 17 stumpings. The West Indian has been a key performer not just for the west indies team but for various T20 franchises all around the globe.

Irrespective of the format and the opposition, Chris Gayle is always a name that will send a shiver down the spine of the opposition. And, during the 2020 edition of the IPL, Gayle was in blistering form. The legendary West Indies batsman scored 288 runs during the tournament and scored his runs at an average of 41.14.

His strike rate too was close to 140(137.14) in the 13th edition of the IPL. If Gayle gets going, then there will be plenty of problems to ponder for all the sides. Gayle will offer his services for Team Abu Dhabi in the 2021 edition of the Abu Dhabi T10 league.